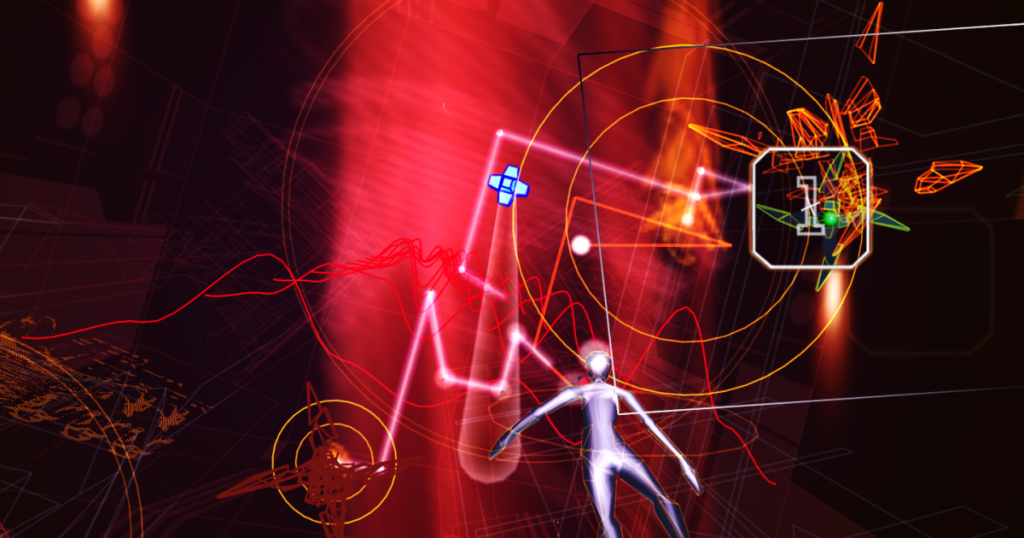 The odd little battery-pack shaped devicewas never released in theUS; it wasthe sort of strangeness that was, at the time, entirely the purview of the Japanese side of gaming. The Trance Vibrator’sonly function wasto buzz and bump in time with the on-screen music, delivering haptic feedback alongside the audio track’s bass. But in doing so, it became the flashpoint for a discussion of sexuality in games that not only stands as one of the finest pieces of videogame writing, but casts a shadow over the discussions that have followed. Surprisingly little writing since has tread similar ground, which demonstrates how much has—and hasn’t—changed in the years since.

In a famous interview, designer Tetsuya Mizuguchi called the trance vibrator “a joke, but a very serious joke… We always listen to music by ear, and you can watch the visuals moving, the dynamics in Rez, so it’s kind of a cross-sensation feeling.” In the same interview, Mizuguchi insisted that the device wasn’t sexual or intended as a sex toy. Of course, quite a few players got other ideas. Players, for example, like Jane Pinckard, critic, writer, and current Associate Director at the Center for Games and Playable Media at UC Santa Cruz. On the blog GameGirlAdvance, she wrote about her experience playing Rez with her partner. After trying it herself, she decided to let him handle the gameplay while she focused on the peripheral. In a short, matter-of-fact piece, she talked about finding and following an obvious connection between Mizuguchi’s “cross-sensation feeling” and her own sexuality. In her own words:

Am I wrong? Has anyone else found a better use for it?

A Frank Discussion of Female Sexuality In Games

Female sexuality is rarely discussed frankly in popular culture, and even more rarely so in tech, which, along with her mastery of image and brevity, is what makes Pinckard’s piece so noteworthy. She posited, in 2002, that Rez might have been designed, intentionally or unintentionally, as a means by which a woman’s sexual pleasure could entangle itself with play, music, light, and sound—that it could be, in short, an integrated part of a gaming experience.

I wasn’t in the field when the piece first ran, so I can’t speak to its initial reception, but it remains a memorable bit of videogame writing in a field with a short memory, so much so that it’s referenced essentially every time anyone writes about the Trance Vibrator. As a teenager who would later realize she was a trans woman, I remember the piece leaving quite an impression on me, as well, when I first read it. It seemed to be uncharted territory, for games and for the way people talked about them. An image of a more frank, inclusive, and playful videogame scene.

The conversation around women’s sexuality in games has certainly shifted, but I can’t confidently say it’s all been for the better.

Revisiting the piece now, it’s striking how much has and hasn’t changed. The conversation around women’s sexuality in games has certainly shifted, but I can’t confidently say it’s all been for the better. There has been clear progress—conversations about the representation of women in gaming and their role in the gaming audience is more prominent than it’s ever been, with advocacy organizations like Feminist Frequency doing important work to call out the limiting and sexist ways women are often portrayed and discussed in games. But there’s also been a clear backlash, a wave of regressive voices trying to minimize the role of women in games and insisting that videogames are—and should remain—a safe haven for the interests of men, sexual and otherwise.

The Current Discussion of Female Sexuality in Games

Now, nearly three years after Gamergate, serious discussion around the sexuality of women in games seems stuck between two modes: pessimistic and reactionary. You can see it any time any depiction of female sexuality in games makes the rounds. Take, for instance, the recent revelation by Blizzard that Tracer, the mascot character of multiplayer shooter Overwatch, is a lesbian, with a conventionally attractive redheaded partner. On the one hand, reactionary voices sounded off with horror that Blizzard had, in their eyes, sold out their straight male fans and embraced an invasive, unwelcome progressive agenda. On the other, many serious-minded progressive videogame critics responded with skepticism, doubting Blizzard’s intentions and questioning whether their depiction of Tracer’s queerness was appropriately progressive.

Don’t get it twisted: the regressive view here is much, much worse. There are no false equivalencies to be made between sexism and pessimism. And the pessimism is not unwarranted, considering that the gaming industry is still dominated by major corporations that employ many more men than they do women. Blizzard’s primary interest is to make money, full stop; everything else is secondary at best. My point is just that those two reactions, as the primary means of engagement, leave little room for another response that, if not somewhere between the two, is at least somewhere to the side.

When the conversation turns into an attempt by all sides to label something as basically good or bad, when prominent voices in the still-male-dominated field of gaming criticism go so far as to suggest that a depiction of a lesbian isn’t progressive enough because a straight man might enjoy it (because lesbians can’t like conventionally attractive women, I guess?), little space is left for any conversation that dares to center the pleasure of women in the way Pinckard’s piece did 15 years ago.