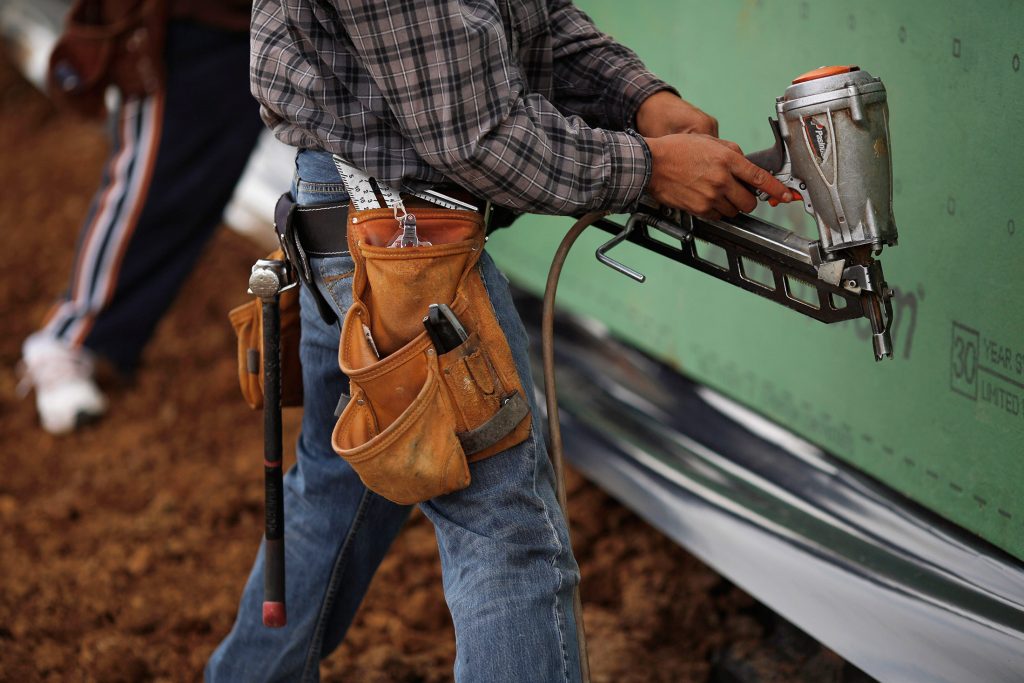 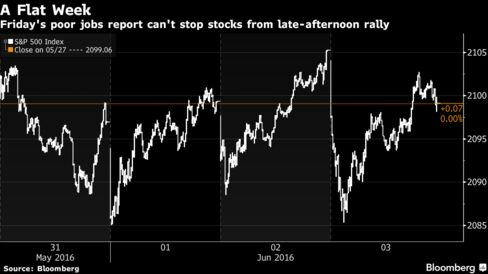 The budding optimism that lifted U.S. equities to a seven-month high couldnt stand up to Fridays employment report.

Stocks in the the S&P 500 Index ended the week little changed despite a late rally that pared losses in the final session, after the weakest labor report in six years strained hopes for a quick economic rebound. As traders pushed back expectations for the Federal Reserves next interest-rate increase, banks had one of their worst days since shares bottomed in February.

The flat week followed the longest streak of monthly gains in two years, reinforcing concerns that the S&P 500 remains trapped in the same trading range that has prevailed since the index last hit a record 12 months ago. Slowing employment growth put the emphasis back on market challenges such as earnings, which are mired in the longest decline since the financial crisis, and the highest valuations in six years.

The jobs report does give ammunition to those in the market who have been defiant in their belief that the economy is not gaining momentum and cant handle a rate hike, said Quincy Krosby, a market strategist at Prudential Financial Inc., which oversees more than $1 trillion. Its been very much a traders market, because youll see some days one sector is leading and some days another sector. If you are of the belief that the economy is not gaining momentum, you may see this market become more defensive.

The addition of 38,000 jobs last month was less than the most pessimistic of forecasts in a Bloomberg survey, bucking the trend of improving economic data that in the past month have shown strength in housing and consumer spending. The report cooled a rally that sent the S&P 500 within 1.2 percent of its all-time high. Before the week, the index had surged 15 percent from its February low as confidence grew that the economy will be strong enough to weather a rate increase as soon as this month.

Stocks in the S&P 500 erased about two-thirds of their decline Friday on hopes that a weakening labor market may force the Fed to keep rates lower for longer. Based on Fed funds futures, traders are now pricing in a 27 percent chance of a Fed boost by July, down from 55 percent earlier, while odds for a June hike have fallen to 4 percent from 22 percent.

This has moved investors not only to the idea that the Feds backed off but truly to question of if this thing is rolling over, said Jim Paulsen, chief investment strategist at Wells Capital Management, which manages $349 billion. Weve gone from the Fed may tighten to rates in two weeks to My gosh, are we recessing? I do think some of the intensity of that emotion will fade as we get through the next week.

The Chicago Board Options Exchange Volatility Index, a gauge of investor fear also known as VIX, climbed 2.7 percent to 13.47 for its third weekly advance in four.

Financial shares slumped the most among S&P 500 industries on Friday, leaving them down 1.3 percent for the week, as lower interest rates and bond yields curb lenders earnings power and erode profits at insurers that make money by investing premiums in fixed-income. Energy producers fell the second most of any industry over the four days, sinking 1 percent, as members of the Organization of Petroleum Exporting Countries rejected a proposal to adopt a new production ceiling.

Utility shares touched an all-time high and jumped 2.5 percent for the week, as investors turned to equities that pay out more as dividends relative to their share prices. The shift to defensive shares is a reversal from the last three months where companies more geared to economic growth, such as commodity producers and banks, led the markets advance.

Fridays decline did little to change the sideways movement of the market. After closing up or down less than 0.5 percent for six straight days, the longest stretch since November, the S&P 500 finished with the smallest weekly change for the year. At 18 times forecast earnings in the next 12 months, the index traded at a multiple thats near the highest level since 2010.

There is no real catalyst to drive valuations higher simply because everyone is waiting to see whether in fact things are going to continue to get better as the market has pretty much priced in, said Brad McMillan, chief investment officer of Commonwealth Financial Network in Waltham, Massachusetts, which oversees $100 billion. People are desperately trying to figure out whats going on, but the news keeps changing and there is no secular trend to ride.