Kobe Steel Ltd. has made a startling admission: It sold aluminum and copper products that failed quality control tests to more than 200 companies. Worse still, it did so not in error but by falsifying data to make it appear that items had made the grade. Aircraft, car and bullet train manufacturers were among the recipients, raising obvious safety concerns. Even a space rocket launched within days of the news uses materials from the company. From Boeing Inc. to Toyota Motor Corp., companies are scrambling to check any affected products. And Japan Inc. is facing up to another embarrassing scandal.

1. What exactly did Kobe Steel falsify?

Data related to the products’ strength and durability. Kobe Steel says it discovered the falsification in inspections on goods shipped in the 12 months through August, affecting some 4 percent of shipments of aluminum and copper parts as well as castings and forgings. As yet, the company, which employs about 37,000 people, says there have been no reports of safety issues.

Hardly. The fabrication of figures was found at all four of Kobe Steel’s local aluminum plants in conduct the company described as “systematic.” For some items, the practice dated back some 10 years ago, according to executive vice president Naoto Umehara. Details have yet to emerge.

3. What do its customers say?

Here’s a taster. Toyota is “rapidly working to identify which vehicle models might be subject to this situation and what components were used,” according to spokesman Takashi Ogawa. "We recognize that this breach of compliance principles on the part of a supplier is a grave issue.” Toyota found the materials in question in hoods and doors, as did Honda Motor Co. Boeing, which gets some parts from Kobe Steel customer Subaru Corp., said there’s nothing to date that raises any safety concerns. Hitachi Ltd. said trains it has exported to the U.K. contained compromised metal as well as bullet trains in Japan. Mazda Motor Corp. also confirmed it uses aluminum from the company, while Suzuki Motor Corp. and Mitsubishi Motors Corp. all said they were checking whether their vehicles are affected. 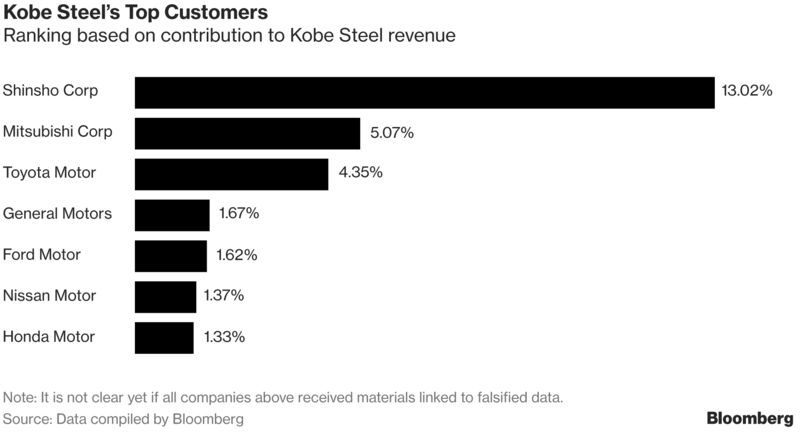 4. And what about the space rockets?

Mitsubishi Heavy Industries Ltd. said Kobe Steel aluminum was used in its H-IIA rocket, though it didn’t say it was the metal in question. “We perceive that there was no problem as the rocket launch was a success,” Mitsubishi Heavy spokesman Genki Ono said. “Checks are under way, but at this point no large effects have been found in the manufacture of the rocket or MRJ.” MRJ is the company’s regional aircraft that also uses Kobe Steel materials.

Kobe Steel’s stock fell by the maximum 22 percent on the first day of trading after the company’s Oct. 8 admission. Chief Executive Officer Hiroya Kawasaki, who is leading a committee to probe quality issues, has run the company since 2013, overseeing moves to expand the No. 3 Japanese steelmaker’s presence in aluminum. “If the aluminum business doesn’t work out well," said Takeshi Irisawa, an analyst at Tachibana Securities Co., "I question where the company can make money,” given the mainstay steel business remains one of low profitability. If the scandal leads to recalls, the cost would be huge, he added.

It’s another scandal that threatens to undermine confidence in Japanese manufacturing. Shinko Wire Co., a Kobe Steel affiliate, in 2016 said a unit had misstated data on tensile strength of stainless steel wires for springs and that it had supplied customers with alloy that failed to meet Japanese industrial standards. In other recent cases, Takata Corp. pleaded guilty in the U.S. in February to one count of wire fraud for misleading automakers about the safety of its exploding air bags. Toyo Tire & Rubber Co. officials were referred to prosecutors in March after the company admitted falsifying data on rubber for earthquake-proofing buildings in 2015. And Nissan last week recalled more than 1 million cars in Japan.