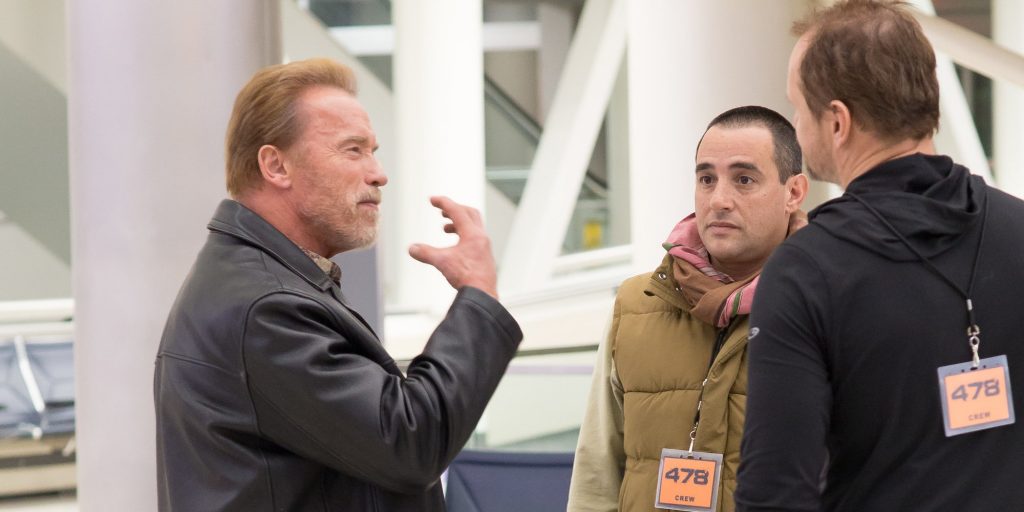 Arnold Schwarzenegger is a colossal man with colossal talent. Hes an actor, producer, businessman, investor, author, philanthropist, activist, politician and former professional bodybuilder. And he is my friend. In fact, I like him so much I bought him Pygmy goats. We laugh about that now. He has a great sense of humor and is very down to earth. I first met the Arnold back in 2015 when we started work on a movie called Aftermath. The movie is not your typical Schwarzenegger movie. Its inspired by real events. An intimate study of loss and tragedy. Its a movie about feeling not an action movie where hes playing a man wielding a sword or a cyborg. Theres no get to da choppa line. Theres just feeling and that was the anomaly. I thought the script was so unusual and thats what you search for as a director, something unique. And working on this movie was a fantastically unique opportunity.

Meeting Arnold for the first time was disarming. Hes a brilliant politician. Hes warm and gracious and instantly puts you at ease. He turned his back on politics in 2010 and has been looking to rebuild his acting career. I was happy to help him on that journey.

We started talking about his history. Hes proud of his past and so he should be. We talked about all the different roles hes played. He felt the film was very important to him because of the depth of feeling of the character and he told me he wanted to explore that part of his acting. He embraced it. In all his movies, hes indestructible. Whereas this movie brings him down to his knees. I said to him: Youve been Conan and all these different characters, but if you show up to set like that, you are going to crush the film. You be the actor and you have to let me be the director and we are going to have a wonderful time. He said: I like that and every day well have victory and we drink schnapps. And in that moment I gained his respect.

This man could be every indie directors darling.

When you get to 70 and youve done everything, there are only a few still willing to challenge themselves in the extreme way that he does. Its a little reminiscent of the Clint Eastwood Renaissance man. Hes an immensely sensitive and in-tune man. I wasnt prepared for what I got. Hes incredibly studied and works extremely hard as an actor. He takes great input in his wardrobe and even went to the extent of visiting all of the locations way before we started shooting. Its like an osmosis for him, getting a sense of where the character lives and how he likes to dress. I never heard the word no from him. It was never a case of I need to look better in this scene he didnt have that ego. He was invested in the character always the first one on set. If you needed him, he was there. Good actors are like musical instruments. You need them to be present so you can play them.

These types of movies rarely get made. Its very dense and there is no light at the end of the tunnel. Theres just grief. The challenge with the script was how to make it come alive as a movie. Its based on events from Russia about a real life mid-air plane collision. A German TV movie was made about it, but writer Javier Gulln wanted to do an impressionistic version of those events. He wanted to enthuse it with his own poetic license.

Arnold was an exceptional choice for the role. And he embraced it. I think the way he has lived his life is if he wants to do something he does it. He has a vision of how he should live his life and he follows it. Its a lesson for us all.

Once when we were shooting in a shitty diner in the middle of Columbus, Ohio in the freezing cold, I was doing take after take of this guy when I stopped and I thought this man could be every indie directors darling. Because he became the character. I just fell in love with that I fell in love with his selflessness. I would hope that he would do more of these types of films. I think the problem is that there is a disconnect between his fans and their expectation. When you look at Arnold you have to think how are we going to deconstruct this giant movie star whos made $8 billion worth of revenue and has been in our psyche for so long how do you undo that? Thats challenging.

Our first day of shooting was a shower scene. I was slightly trepidatious about how he was feeling. I asked him if he was ready and he replied: Totally! I was relieved. There is no vanity with him. It was collaborative. He believed in me and backed me all the way. And thats what you want as a director. Whether you are a writer, cinematographer, actor or director you need to have that confidence behind you to make those decisions. Its difficult to be questioned over why you are making a decision. He never did that. If your team is behind you, its the greatest feeling in the world.

Arnie liked to play chess in the trailer and during some down time he invited me to play. I felt like Lou Ferrigno in Pumping Iron as he tried to psyche me out. Trying to force me to make a bad move. He studies the game. I learned about his strategy of constantly practicing and consistently trying to push himself. This isnt a man who can idle away the hours. Its a man living his life to the fullest, not wasting a moments breath.

Hes wonderful to work with. He is unbelievably funny and one of the smartest men Ive ever met. His motivation would put anyone to shame. This is a guy who would eat lunch with the crew completely self-assured and comfortable with his status. He would talk to production assistants and caterers the same way he would talk to the director of photography or a producer. In his mind, there was no hierarchy. Everyone has value.

On Arnolds last day he was gracious enough to keep his jet waiting a few extra hours so we could get a scene finished. Darren Aronofsky flew in with magician David Blaine. This was one of the more bizarre days. We were shooting the heaviest scene of the movie and I looked around and David Blaine was doing magic tricks with the script supervisor, whod stopped taking her notes as she was being wowed and amazed by Davids sleight of hand. David Blaine in his monotone voice said: Im very sorry for coming to your set and doing magic tricks. I thought, dont apologize it made it a memorable day. Darren and Arnold were Snap-chatting whilst I was shooting Scoot McNairy in a very intense scene. The moment caused me to take pause. If you were to take a still shot of this moment, that picture would make no sense in any other universe except in the movie world. A confluence of events that was somehow begging for a punch-line.

I understand why Darren wanted to produce this movie, because its unflinching. Arnold doesnt need the money, he took it on because it was a challenge. I did it because I loved the script and Id seen Maggie, a small dramatic movie starring Arnie that got some notice. It made me think of the phrase there are no small parts and there are no small movies. Arnold had basically done everything every actor was supposed to do in terms of commercial success. But the challenge was to realize Arnold as a wonderful dramatic actor. Arnold is now taking a different course in his career and I wanted to be supportive of that.

I was coming off the movie Nightingale which had garnered critical success and a Golden Globe nomination for the actor David Oyelowo. I was excited to be working with Darren and whatever perceptions I had of Arnold were shattered when we sat down to talk about the role. Often the actors are typecast and not just by the roles they take, but by the way the general public wants them to be and to be seen.

Arnold and I had a friendly exchange before one scene. A scene where he has his shirt off. He said with a grin: Elliott, Im a 70-year-old man. He wanted to look his best. And I looked around the room and laughed to myself. At 70 years old he looked better than any 30-year-old on set. They all respected him. He was fantastic for the other actors. He was so willing to stand off set and do the off lines. He knew that the other actors needed him and he made himself available. Thats the most you can ask of someone of his stature.

I dont look at the film regularly but I am reminded of all the great times and the laughter we had, even though it was a very serious melodrama. This touched me in a human way and the feeling of working with Arnie as an actor was transcendental. Here I was with this giant movie star who was willing to work so hard to find the core of the character and delivered it with such ease. Arnie would often talk about the rep. He does things over and over again and that repetition would ultimately lead to perfection. I have to imagine he was saying the lines over and over again until they were perfect in his mind. He is so focused.

He came to America with nothing and picked an unusual subject. Like everything in his life, hes been a little bit of an underdog. He arrived and became Mr. Universe five times. When he couldnt make money from body building he would go out and work in construction. This led to him building his other businesses. When people laughed at him and said he couldnt work because of his funny voice and because his English wasnt that great at the beginning, he continued and became the highest paid movie star in the world. No one complained about his body. But he worked at it he had a vision and no one was going to get in the way of his vision. From construction he decided he wanted to be an actor and he took acting lessons, improved his English and got his break in Olympus in New York where his voice is dubbed. The irony being that later his voice became instantly recognizable. He became the highest grossing actor in the world at one point. Its impossible not to know about Arnold. He is as ubiquitous as he is relentless. The man I met wanted to act. He wanted to push himself with the same drive that got him over here from that small town in Austria. That man became my friend and we made a great movie together.

I dont know if there is ever going to be anyone like him again. No doubt Trump will hate the movie. Hes going to tweet about it for sure.