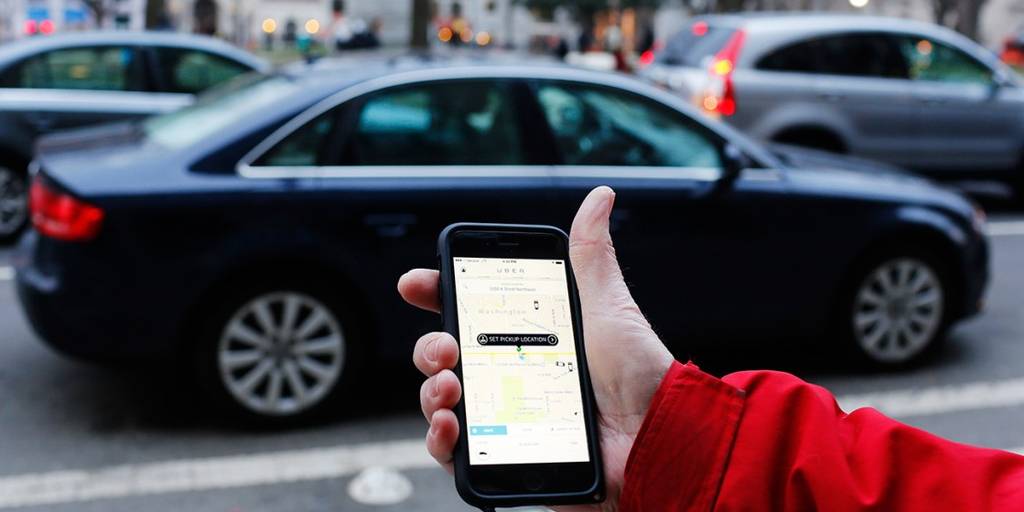 Uber is now offering $1,000 cash advances and letting drivers work off the money

There is growing concern among Uber drivers, both current and prospective, about a recent pilot program launched by the company that offers new drivers $1,000 in advance, and then requires repayment via monthly earnings.

The Advance Pay program launched in early April 2016 as part of a partnership between Uber and Clearbanc, a financial services startup that focuses on self-employed professionals. Made available only to new drivers in California and Michigan, the initiative spots drivers $1,000 up front, with as much as 25 percent of that amount available immediately, and the rest coming after the driver completes their first trip.

Glad to announce our partnership with Uber on Advance Pay by Clearbanc! Now offering Interest Free Advances up to $1,000 to new Uber drivers

For repayment, the company takes a portion of revenue the driver generates each week until the balance is paid off. The percentage, which can be as much as 50 percent of a driver’s income, is determined up front and doesn’t vary over time. A driver can also pay back the advance directly to Clearbanc to wipe out the balance.

The advance is “interest free,” according to the terms provided by Clearbanc, but that’s where things start get a little confusing.

Recent uproar surrounding the Advance Pay program claimed that, in addition to the weekly repayment percentage, the company also charges a fee of $2 per day if there is a balance on the account. The report came from a user on Uber-People.neta popular forum for drivers on ride-hailing platformsand was circulated on Twitter.

This is why I read the msg boards. Uber is giant @CFPB powder keg. One predatory financing tactic after the another pic.twitter.com/sonKK2p9YC

Those concerns seem to be unfounded; in the terms of service from Clearbanc, it indicates that the company applies a $50 fee if the advance isn’t paid off within 15 weeks. The $2 fee that seems to have caused some confusion is for a different Uber finance service called Instant Pay.

Clearbanc’s Instant Pay is available to Uber drivers, but isn’t offered as a partnership through Uber. The plan allows driversand users of other sharing economy servicesto get their earnings paid to them in advance with a $2 service fee charged for each deposit. That fee does not apply to the Advance Pay program.

A representative for Clearbanc confirmed to the Daily Dot that there is no daily fee nor interest rate applied to the Advance Pay program, and noted the company could make the distinction between programs “more clear to avoid confusion.”

The terms of the Advance Pay agreement are worked out between individual drivers and Clearbanc, and while the company doesn’t run a credit check, it does have a screening process and Advance Pay recipients have to be approved. The representative did not provide any additional details as to what the approval process entails.

The Clearbanc representative was also unable to provide any specifics as to how the company reclaims money from the Advance Pay program if a person were to fail to repay after 15 weeks; the payment plan that skims a percentage of profits from Uber trips ends after that period and the driver will have to pay back Clearbanc directly beyond that point.

According to the representative, the $50 fee applied after 15 weeks is a maximum amount and often isn’t assessed in full; the company “works closely” with the recipients to make sure they are able to pay back their balance.

The representative did note two ways in which the balance is notcollected:money is not automatically withdrawn from a user’s bank account, nor is the balance transferred from Clearbanc to a collection agency if it isn’t paid in full.

Tom Dresslar,the deputy commissioner of policy and planning at the California Department of Business Oversight (DBO),noted that drivers should approach such offers with caution, as offers like Clearbanc’s rarely come without a catch. “They may not call itinterest, you can call it a ‘finance charge’ or whatever youwant to call it, but it’s not free,” he said.

Ira Rheingold, the executive director for theNational Association of Consumer Advocates (NACA), told the Daily Dot that the terms of the program, as they were described, were considerably better than high-interest, short term loans offered through payday loan companies. “Compared to what the market place looks like, it’s not bad terms,” he said.

Were excited about this pilot with Clearbanc because Advance Pay will help connect people most in need of immediate, additional income with reliable, flexible work at the push of a button.Rachel Holt, Uber regional general manager, told the Daily Dot.

The misconception about fees has clouded other legitimate questions about the Advance Pay program, starting with just who the initiative is aimed at. By targeting people who have not yet signed up to drive for Uber, it appears the company is dangling a significant cash incentive that would appeal to people in need of an immediate windfall.

That’s no small portion of the population; research from the Federal Reserve found that 47 percent of people say they either could not cover an emergency expense costing $400 or would need to sell something or borrow money to cover it; two-thirds of people would struggle to cover a $1,000 emergency and would need to borrow money according to research from the Associated Press.

Advance Pay has essentially the same targeted clientele as payday loansan industry that has no shortage of in-need customers but is so fraught with bad practices that Google placed an outright ban on advertisements for the loans.

“Consumer advocates are struggling to stop the payday lending industry, and as we struggle to find alternatives for people who are in need of short-term cash that isn’tunconscionable,” Rheingold explained.

Payday loans typically trap recipients with exorbitantly high interest rates that often cost more in fees than the initial loan was for, and the annual percentage rate on these loans often exceed 400 percent. A survey by the Pew Charitable Trustsfoundthe average payday loan recipient will take out eight loans of around $375 per year, often rolling over the initial loan when they are unable to cover the cost, while spending $520 on interest.

“If the alternative is somebody going to get a payday loan at incrediblyusuriousrates, then probably is a pretty good idea,” Rheingold said.

Uber’s initiative may compare favorably to predatory lendershowever low that bar may be to clearand it doesn’t necessarily trap its users in the same way. But it does come with its own hidden costs that may not be readily apparent to a first-time Uber driver.

For starters, there’s the expense of driving in the first place. Becoming a contractor for Uber means the new driver will be completing trips that they otherwise wouldn’t be taking. That puts additional miles on their vehicle, eats up gas, and increases the likelihood vehicle breakdown; all expenses that fall at the feet of the driver.

These costs will all vary depending on the vehicle that a person drives, but the Internal Revenue Service (IRS) sets the standard milage rates for operating a vehicle for business purposes at 54 cents per milea figure that is designed to account for the costs of maintenance, repairs, taxes,gas, insurance, and registration fees.

“In some ways, it’s a $1,000 advance to help them pay off the cost they might have from driving if they don’t have it up front and will need that additional help,” noted Rheingold.

There’s also opportunity cost; any person opting to take Uber’s offer of a $1,000 advance should understand that they are essentially committing to working for the company to pay that money back (though the money can technically be paid back directly and without driving more than one trip). If the person works another job alreadyas two-thirds of Uber drivers dothey’ll have to figure out how to fit time to serve as an Uber driver into their schedule.

For drivers who take up the Advance Pay program, the math during the period of time they are splitting revenue with Clearbanc isn’t favorable. Uber takes a20 percentcut of each fare to startand has tested going as high as 25 to30 percentin some markets already. Between 30 to 50 percent of the remaining revenue is taken by Clearbanc until the $1,000 advance is covered. That leaves drivers with as low as 30 percent of the cost of each trip left in their pocket before accounting for their own expenses incurred.

The equation becomes even more challenging when attempting to account for Uber’s recent practices that have made fares more affordable for riders and profits much smaller for drivers.

Uber has slashed fares by as much as 45 percent in many major markets, including cities like Detroit, which falls under the new Advance Pay program. Rates for UberX drivers in Detroit have been cut three times already in 2016 according to UberEstimate.com, and fell as low as $0.30 per mile for fares. While these rates fluctuate and have increased, a driver attempting to pay back an advance can have the repayment plan upended by an unexpected rate cut.

“To decide whether or not you want to work for Uber, you should be making a cost-benefit analysis for yourself. You’re going to need to figure out if this is something that will earn a decent living for you,” Rheingold advised.

For Uber, the math is much simpler; it’s essentially guaranteed itself a new driver who will work at least part time, the period of time during which a portion of fares goes toward paying down the advance payment. While 60 percent of Uber drivers surveyed by Coworker.org said they considered dropping from the platform after the widespread rate drops, new drivers with the $1,000 advance hanging over their head would be less likely to flee under the circumstances.

Earlier this year, NPR alsoreportedthat Uber plans to kill its surge pricing model, which increases fares during periods of higher demand for rides. The model is extremely beneficial to drivers, many of whom plan around hours where rates spike in order to snag higher earnings. Drivers who start their career with Uber with a $1,000 debt may feel obligated to drive regardless of fares to pay back their advance. Uber later denied any changes to surge pricing were coming.

Whether drivers stay on board beyond the 15-week loan period is of less importance to Uber. The company already has a high turnover rateits own survey found that 76 percent of drivers had been on the platform for less than six months. If Advance Pay puts more new drivers on the road, even for a temporary period, it keeps the wheels turning for the company.

Other drivers have also expressed concern that Uber may eventually do away with other incentive programs like signing bonuses and will replace them with Advance Pay. Uber has previously offered up to $500 to drivers after completing one trip. These bonuses are generally contingent on ongoing performance goals, but it’s $500 in addition to earned income rather than a $1,000 advance on future revenue.

Rheingold ultimately viewed the Advance Pay program with a tepid optimism, indicating that if it operates as Uber suggests, it could be beneficial to some. Still, he noted that he would “caution anyone who takes an advance to recognize that it has to be paid back and that they’ve made the decision that this is in fact something that they will work toward.”

Tom Dresslar of the California Department of Business Oversight said the program is too new and too short on details to discuss from a regulatory standpoint, but noted that his organization was looking into the matter.

“The website doesn’t provide a lot of usable disclosure from a regulatory standpoint,” he said. “Given that, and given the similarity the program appears to have with payday loans or merchant cash advances…we would urge Uber drivers to be cautious and to do the homework necessary to know what they’re getting into before entering these arrangements.”