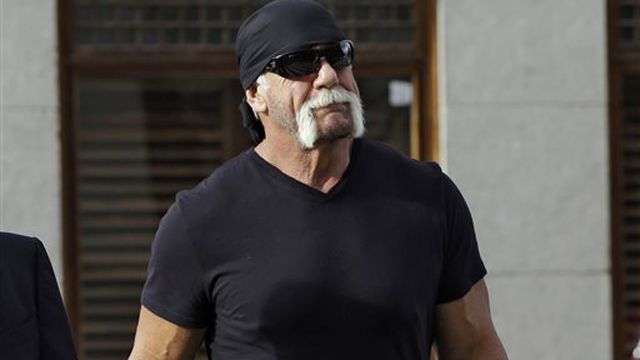 Hulk Hogan: I ‘embellished’ about the number of women I had sex with Hulk Hogan returned to a Pinellas Country, Fla., courtroom on Tuesday to be cross-examined by lawyers for the media website, Gawker.

Clad in a black blazer, black undershirt and black bandanna, Hogan strolled into the courtroom alongside his lawyer and took the stand shortly after his arrival. He had sunglasses perched on his forehead and a large chain bearing a cross around his neck.

A reporter asked Hogan as he walked in to the courthouse if he was ready for the day ahead of him and he confidently replied, Yes sir. Its going to be a great day.

The trial aims to determine if Gawker have the right to post a one minute and forty one second clip of a sex tape Hogan insists he didnt know was being filmed. Approximately nine seconds of the clip Gawker shared online included actual sexual content.

Hogan took the stand for the second day in a row and the initial questioning by Gawkers legal team spent several hours focused on the celebritys response in the media when reports of the sex tape first surfaced, particularly when he called into TMZ Live and discussed the tape with TMZ hosts.

He admitted that when he stated he didnt know who the brown-haired woman in his sex tape was he embellished a little bit about the number of women.

After Gawker posted a clip of the tape, Hogan said there were many people who assumed he was involved in its creation and it being shared with the media.

It wasnt about Hulk Hogan making a sex tape. Thats not what happened. Its never been about that

He insisted he in no way made the tape to make money.

We had calls from Vivid Entertainment and they said theres an open checkbook, well pay you anything you want,” he recalled, but he said he had no interest in profiting off the tape.

He said of the clip Gawker shared on their website, It lives forever. It will be there forever on the Internet.

Hogan testified his experiences have changed him.

I just havent felt like myself this is still tearing me up, he said. I havent been able to get back up to who I was before [the tape] Im not the same person I was since all this craziness happened.

The wrestler insisted his attitude about the sex tape in interviews was a result of him being in character, as Hulk Hogan. Hogans real name is Terry Bollea but a focus of the trial so far has been the differences between the character Hulk Hogan, which he developed for the ring, and who he is in private.

I was totally Hulk Hogan [for the TMZ interview] because I wasnt at home in my private house, he said.

A lawyer also grilled Hulk about why he answered Howard Sterns sex-tape related questions during an interview following the reports of the tape.

Hogan said his replies to Sterns questions with character-driven, once again reiterating the differences between his wrestling character and his traits as a private person.