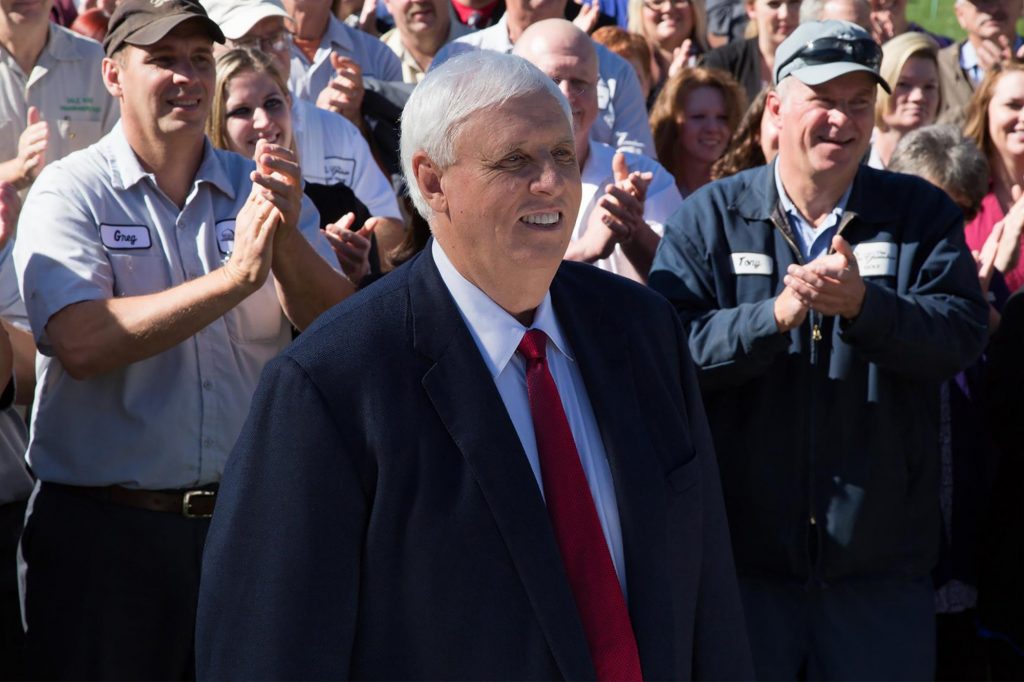 Jim Justice is a big-talking, brash billionaire who saved one of West Virginia’s most precious historic hotels. But can he do the same for the state?”>

Everybody in West Virginia knows Jim Justice saved the states historic Greenbrier resort from bankruptcy and restored the jobs of 650 laid-off workers.

In a state that ranks low on almost every measure of prosperity, he boosted the local sense of pride by building a training camp for the New Orleans Saints on the property and convincing the PGA to host a premiere tournament at the Greenbrier, turning a dying resort in White Sulphur Springs, West Va. into a sports destination.

He also added a casino, which the Greenbriers web site describes as Monte Carlo meets Gone With the Wind. Its splashy motif tested the old guard, but thats how Justice rolls. According to Forbes, hes West Virginias only billionaire, and now at age 65 hes the frontrunner for governor in tomorrows Democratic primary.

A huge bear of a man with a shock of white hair, he stands 67, weighs over 300 pounds, and wears crocs on the campaign trail. Like Donald Trump, another billionaire businessman turned politician, Justice makes a lot of grandiose pronouncements about what he could do if elected to make the economy take off, promising voters in an April debate, Ill take you on a rocket jobs ride youll never believe.

Hes also dared to question the future of the states most sacred of sacred cows: Coal

Coal is so central to the states psyche and its economic well being that the minerals image is in the state flag.

I do not want to give up on coal. I do not want to throw it away, but you have to have a lot more than coal, Justice told students at Blue Ridge Technical Community College, according to the Martinsburg Journal. It does not take a rocket scientist to figure that out. No matter what I do, coal may never come back.

That passes for radical in coal country, but theres more to the story. Some accuse Justice of talking out of both sides of his mouth when it comes to coal, which is the source of his fortune.

He inherited Bluestone Coal, now Bluestone Resources, from his father, selling it to a Russian conglomerate when coal was still riding high, then buying it back last year for 99 percent less than what he sold it for in 2009.

The coal business did a nosedive in those six years, and Justice says he bought the mines back because he didnt want to see all those miners thrown out of work. He reopened several mines and put over 200 miners back to work. The United Mine Workers has endorsed him.

Justices chief asset is his larger than life personality, and his ability to convince voters that he can do for the state what he has done in his private life, think big, generate jobs and make money.

I can do what no one has ever done, no one, because I have a creative mind like nobodys business and I wont take no, he said in an interview with the Charleston Gazette-Mail. I can pick up the phone and call anybody and hell take my call.

Just like Trump on the national level, the braggadocio does not encompass much in the way of specifics. The message is trust me, Im a smart guy with a lot of contacts, Ill make it happen. If elected, Justice says he will be marketer-in-chief for West Virginia.

Thank You!
You are now subscribed to the Daily Digest and Cheat Sheet. We will not share your email with anyone for any reason

Where you think he stands on coal depends on what you choose to hear. But as a coal man himself, he is uniquely positioned to lead the way with tough love.

Candidates in both parties perpetuate the myth of coal returning, says Ray Smock, who directs the Byrd Center for Congressional History and Education. You cant get elected in West Virginia without suggesting positive things about the coal industry coming back.

Don Blankenship, the disgraced former CEO of Massey Energy, was convicted last month on one misdemeanor count, which carries a $250,000 fine, which he paid, and one year in prison, which he is appealing. While way too little and too late for the 29 lives lost in an avoidable mine accident six years ago, such a verdict ten years ago would have been unimaginable. Booth Goodwin, the former states attorney who prosecuted Blankenship, is one of the Democratic contenders in Tuesdays primary.

Rob Byers, co-editor of the Charleston Gazette-Mail, told the Daily Beast that candidates are saying things they never would have said seven or ten years ago. Theyre saying the coal industry will not save us, and that climate change is real.

Of course any nod toward climate change is so couched as to be almost insignificant. Justice says theres no need to blow our legs off on a concept, but concedes he doesnt know for certain one way or the other, and thats progress of a sort.

When Justice visited with Gazette-Mail editors, he brought an enlarged photo of himself fishing in a creek he had saved and donated to a conservancy group. He wanted them to know he cared about the environment.

Thats not to say Justice isnt full of bravado about the coal industry coming back, which is politically expedient but disingenuous given the trend lines. This may be the last election you have to do that, says Byers, who has interviewed a number of Democratic House candidates, and a lot of them are saying flatly that coal is not coming back. Im not saying theyll get elected, but theres a mood shift, he says.

Justice often says that even when coal was king, West Virginia was 50th in everything else. The Greenbrier had been losing nearly a million dollars a week when he took it over in 2011. Its still not profitable. Its going to be easier to turn around the state of West Virginia than the Greenbrier, he told the students.

For all his altruism, Justice has a reputation for not paying his bills until he gets threatened with a lawsuit. He has a folksy explanation that as the CEO or owner of multiple businesses, including the largest agri-business east of the Mississippi, its like changing socks.

Most people change their socks probably a couple times a day, maybe once a day. Ive got to change (mine) 500 times a day. The likelihood of me putting one pair of socks on when one is green and one is blue during the course of the day is doggone high.

Thats the kind of explanation that at another time might have tested the confidence of voters in the barons of business to work the levers of government. Now, having lost faith in conventional politicians, voters seem ready for Plan B.

He chalks up a history of overdue bills and fines by claiming that any CEO and owner of multiple businesses is bound to make mistakes. Its like changing socks when you have too many, he says. The likelihood of me putting one pair of socks on when one is green and one is blue during the course of the day is doggone high.